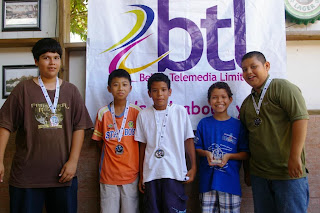 On Saturday 24th March the West Cayo Chess Association held their tournament to select 24 players to go to the National Chess Olympiad in May.
There were 44 competitors split into three age sections. Everyone played four games to determine the outcome. There were quite a few players in their first tournament who got a good experience of tournament chess where nerves play a part especially in round one. 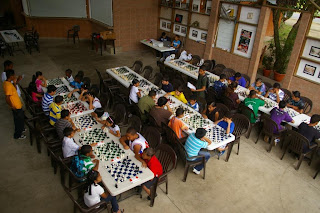 There were some very close and interesting games where concentration was so important, one poor move can lead to defeat. 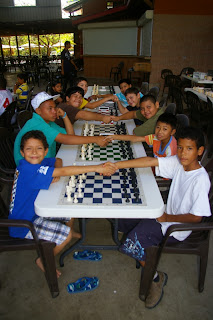 A big thanks to Hode's place for hosting the tournament. Thanks to Belize Telemedia Limited and the Belize National Youth Chess Foundation for sponsoring the event. 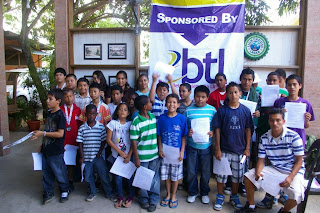 Over the next few weeks extra time will be spent practicing and trying to learn certain tactics before the Olympiad on May 19th. West Cayo have a good team but competition is very tough and all districts will be ready for competition with respect for all. 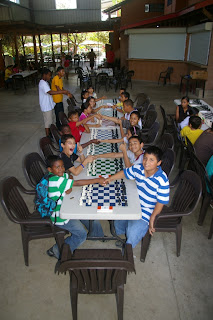 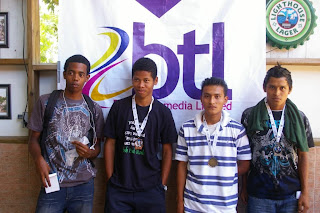 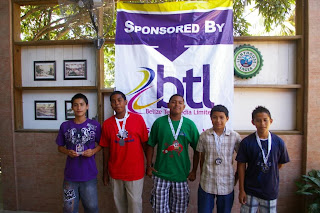 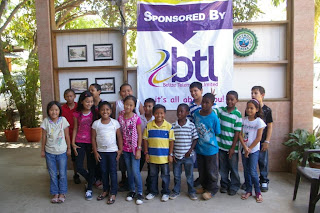 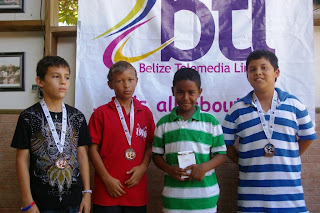 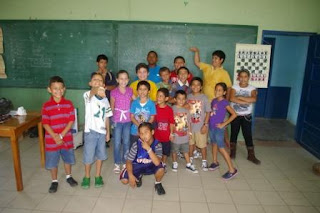 Over the summer a couple of chess weeks were held at St. Andrews School for West Cayo Kids. We spent each week learning about how to move the pieces and got as far as some basic tactics but we also spent time doing some chess related art. 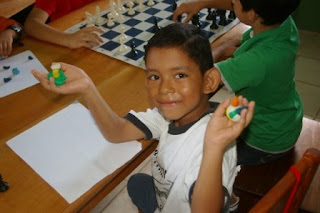 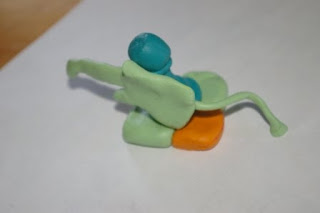 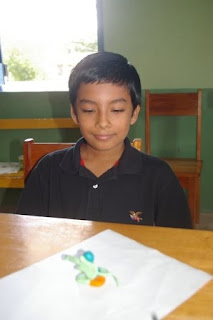 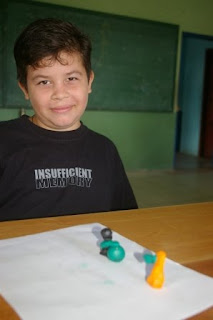 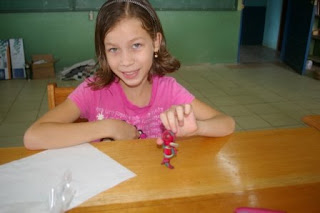 Posted by Belize National Youth Chess Foundation, affiliated with BCF at 8:47 AM No comments: 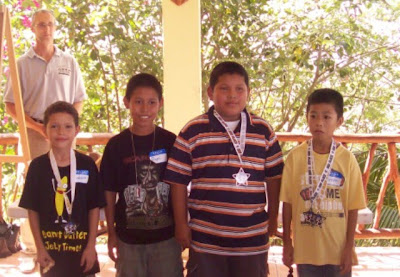 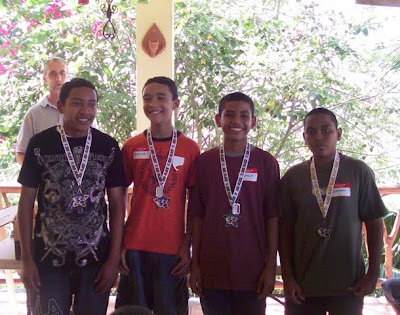 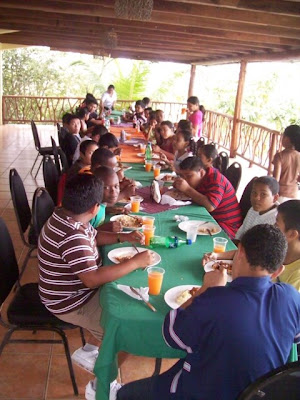 Posted by Belize National Youth Chess Foundation, affiliated with BCF at 9:19 AM No comments:

On the day of the testing: junior coaches, their trainees, principal of their school and their Head Coach, David Coombs 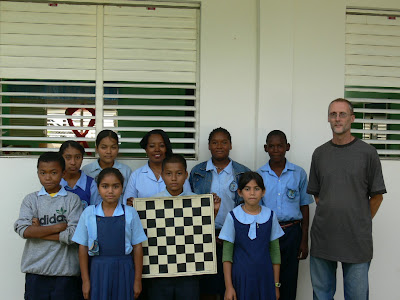 David Coombs, Cayo Chess Coordinator and Coach, developed further the idea that he and some other coaches were discussing before: we, adult coaches, should not only acknowledge the fact that kids can teach other kids to play chess, but we must be able to assess the quality of their teaching and officially recognize it through the official certification procedure. Below you will find the description of the procedure that he developed and utilized with the first group of students in the St Barnabas School:
Procedure for the Junior Coaches Certification.
Stage One. Beginner coach.
Students who want to try to be a junior coach must know all the basic rules of the game. This knowledge will be tested by questioning and playing chess with a visiting or club coach.
Students must know basic opening tactics, checkmate methods and stalemate situations. The students must be able to demonstrate these.
The Student must also be willing and able to communicate this knowledge and teach others.
It is unlikely that a student would reach this stage until having played for at least six months.

We encourage other coaches to embrace that concept and empower their players through the official certification. Brian Chun, Stann Creek coach, introduced long time ago to his club the idea of peer teaching, and we can all observe that his team right now is the strongest in the country. Thanks to Cayo initiative, there is a way now to acknowledge those kids work.
Posted by Belize National Youth Chess Foundation, affiliated with BCF at 8:41 AM No comments: 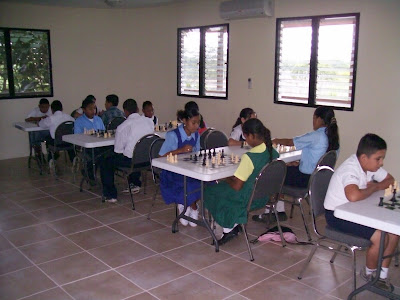 The Manager of the Aguada Mr. Bill Butcher presents the medal to theThird place and top female player: Elida Frutos 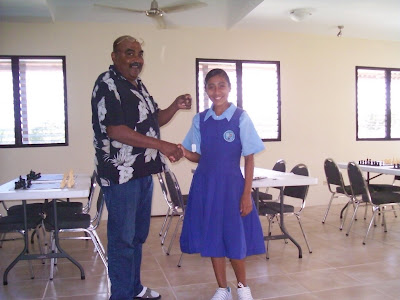 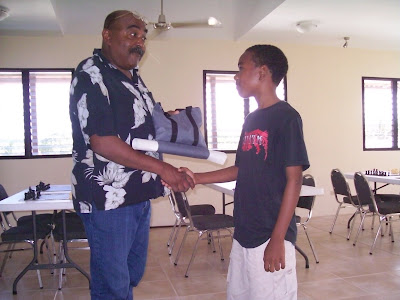 Four best players of the tournament: 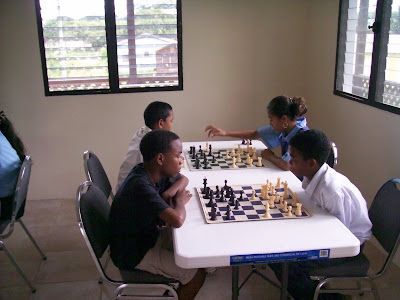 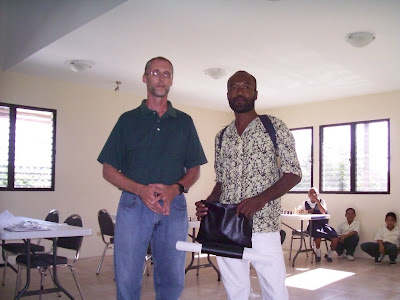 The event was held at the Aguada Hotel in Santa Elena, the venue was kindly provided by the Manager of the Aguada Mr. Bill Butcher. Their conference room proved to be an excellent venue for such an event.

Four of these schools have started a chess club with the assistance of the Belize National Youth Chess Foundation (belizechess.org). There were a total of 25 students taking part and the competition was very tough with many close games. Each student played four games and at the end of the day the winner, undefeated with four wins was Vidal Adolphus from the St. Andrews Anglican Primary School. Second place was taken by Clifford Coleman from Ontario Christian School and in third place and top female was Elida Frutos from St. Barnabas Anglican.

At the start of each round of games the students shake hands before playing and there is complete silence in the room as they concentrate on their moves and try to think what their opponent is planning, as the games end one by one the students congratulate each other with handshakes to signal the end of the game, 'checkmate' is the aim.

The winning team, who had 10 1/2 points, was the team from Bishop Martin Primary School, just half a point behind was St. Barnabas Anglican and in third place was Ontario Christian School.

This event is the first of it's kind in this part of the Cayo district but many more are to follow because chess is the fastest growing sport in Belize, there are 21 primary schools in the District starting chess clubs. Chess is extremely good for developing a whole range of academic and social skills.

I would like to thank the following sponsors whose financial support for the summer chess program enabled us to additionally hold this tournament. Sponsors, Atlantic Bank Ltd, BelizeTelemedia, Ms. Pamella Picon/Belize Christian Ministry, Orange Gifts, Chaa Creek, San Ignacio Hotel, St. Martins Credit Union, Bowen and Bowen. A big thanks to these businesses for assisting in the development of our children. 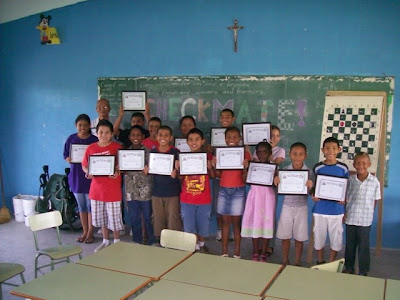 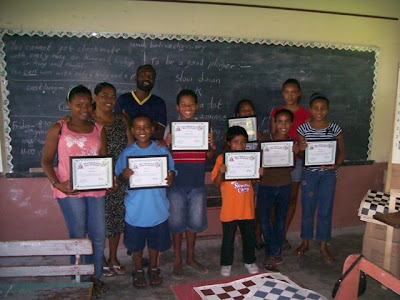 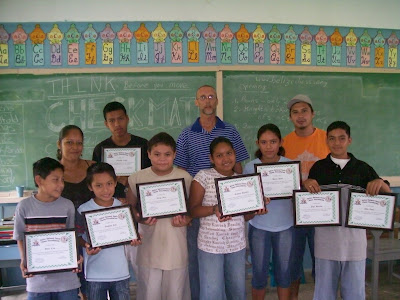 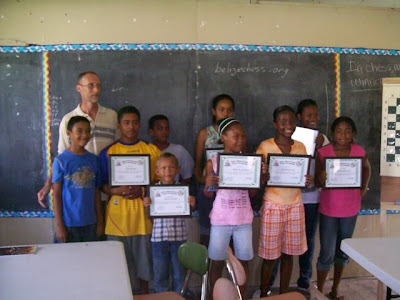 Since March last year, the Belize National Youth Chess Foundation (BNYCF) led by Ella and Ian Anderson has been promoting the game of chess in Primary schools. The main idea behind this initiative is to use chess as a tool to enhance a wide range of social and academic skills.

The Chess Olympiad held in Belmopan on May 3rd was a national competition organized by the BNYCF, there were a total of 144 primary school children taking part in 36 teams. There were four teams from Cayo District three of these were from the Belmopan area, only one team was from the area west of Belmopan. To address this lack of chess clubs in this large area a stage one training for teachers was held in May and it was attended by teachers from seven schools. Following on from that, there was an effort to organize four summer chess programs for children from these schools.

Mr. David Coombs who has been involved with the BNYCF since it began, arranged to teach four chess programs in the west Cayo area during July and August 2008. Each one was held over five mornings. The first at the R.C. school in Succotz. The second at the Bishop O.P. Martin school in San Ignacio. Thirdly in the Santa Elena Primary school and finally at the Ontario Christian School.
Each week Mr. Coombs was assisted by teachers from each of the schools with the aim of the participating students and teachers starting a chess club at each school in September. During each week the students, who almost all had no knowledge of chess beforehand, were taught the basic moves and rules of chess. By Thursday of each week the children were playing a complete game of chess. At the end of each week students were awarded certificates of achievement. A total of 37 students participated. The next challenge is for those teachers and students to practice for a local competition that will be held in January.

To fund these chess weeks an appeal was made to some local and national businesses, apart from the expenses of running the programs the main objective of the fundraising was to purchase four chess sets for each of the participating schools so they can begin the club.

The summer activities were supported by the B.N.Y.C.F. Donations were received from; Atlantic Bank Ltd, BelizeTelemedia, Ms. Pamella Picon/Belize Christian Ministry, Orange Gifts, Chaa Creek, San Ignacio Hotel, St. Martins Credit Union, Bowen and Bowen. A big thanks to these businesses for assisting in the development of our children.

To move Cayo District forward in the effort to compete against the best young chess players in Belize a meeting will be scheduled in October in San Ignacio or Santa Elena at a location to be announced. If you are a chess player or interested in getting involved with the game please email David Coombs at lightningcoombs@yahoo.com for further information about the meeting. An announcement will also be placed in newspapers.
Posted by Belize National Youth Chess Foundation, affiliated with BCF at 4:45 PM No comments:

Belize National Youth Chess Foundation, affiliated with BCF
We are not-for-profit organization dedicated to promoting chess, as an educational tool, among the disenfranchised youth of Belize. We use chess as an educational and motivational tool for the purpose of stimulating their interest in the intellectual activity that will enhance their academic and social skills, while making learning fun and providing an environment that will keep them off the streets.